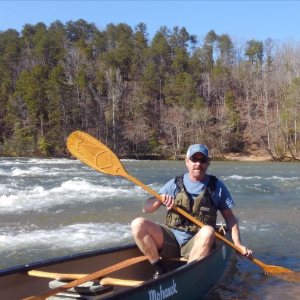 David moved to the Broad River watershed in 1987 after receiving an Engineering degree from Clemson University. He worked in manufacturing for several years in Shelby, and has been fishing, paddling, and exploring the watershed’s rivers and tributaries for over three decades now.

David’s first civic involvement was in the late 90’s, when he joined efforts to rebuild and restore the carousel in Shelby City Park. The carousel is now a jewel of the City of Shelby Parks system. Since 2000, David has also run a woodworking business at his home in Lawndale.

We value mountain communities that are vibrant, livable, and respectful of their connection to and dependence on the region’s natural environment.

We value the integrity of natural systems – air, land, water, and native plants and animals – and believe in protecting and restoring them for the benefit of all generations.