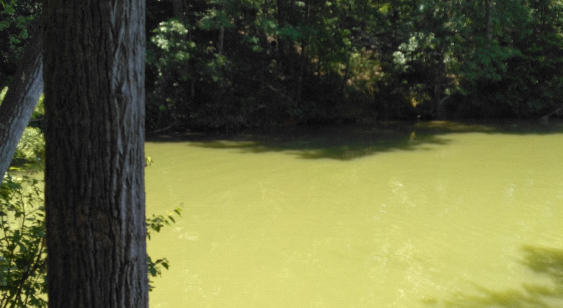 We don’t know if the algal blooms are recurring, but there was a confirmed harmful algal bloom in Moss Lake earlier this summer.

Your Broad Riverkeeper, David Caldwell, goes out each week to test recreational waters in the Broad River Watershed for bacterial pollution. While sampling at Moss Lake on June 3, David noticed that the water was very green and cloudy, so he also tested the water with a YSI meter that measures temperature, dissolved oxygen, conductivity, pH and turbidity (a measure of cloudiness).  “I got really high dissolved oxygen and pH readings, so I did some research and found that this could be an indicator of an algal bloom.” 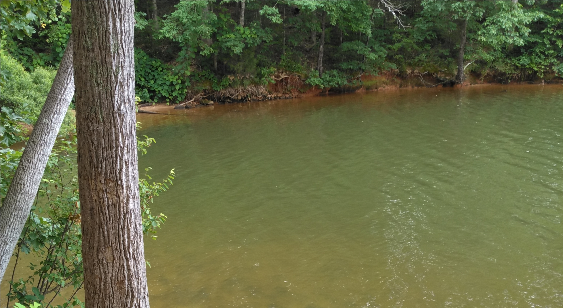 Algal blooms, which form due to an excess of nutrients like nitrogen and phosphorus, can release toxins that are linked to human illnesses and have even been shown to cause death in livestock and dogs.

The following Monday, David received a call from a Moss Lake resident who had noticed many dead fish in the water. David notified the NC Department of Environmental Quality (DEQ) and they sent a staff member out on June 10 to take water samples in and above the lake. The report came back confirming an algal bloom, and it was named a Harmful Algal Bloom (HAB) because of the presence of cyanobacteria that “may produce cyanotoxins.” A second report confirmed the presence of a cyanotoxin called microcystins, which can cause illness in humans and animals that come into contact with water affected by a bloom. The concentration of the toxin was only 0.4 micrograms per Liter (ug/L) – well under the EPA’s recommended safe level for microcystins of 8 ug/L. Keep in mind, however, that the samples were taken by DEQ seven days after the algae were first noticed, so much of the algae had died off by then. In talking to that same resident after these reports came out, David also learned that he had noticed similar conditions at least twice since then, and once with a very foul odor.

As algal blooms become more and more common due to rising temperatures and an increase of nutrients in our waters, Riverkeepers across the state believe more study and analysis of algal blooms in Moss Lake and elsewhere must be done. We would like for the residents at Moss Lake to take more of a lead in identifying and reporting possible algal blooms. If the water turns really green, they should contact DEQ immediately. The “life cycle” of algal blooms can be really quick –as short as a couple of days – so quick reporting is important.

Some of the residents around the lake do not want the bad publicity that would come with raising awareness to this potentially dangerous problem. However, if we don’t first acknowledge that there may be a problem, then there will be little effort towards determining the root causes of the issue and improving the water quality in Moss Lake and other water bodies. “I would ask the Moss Lake area residents this,” David says. “What do you want your lake to look like in 10 to 20 years?  What will you do to help realize that vision?”

To learn more about algal blooms, visit the NCDEQ page here or the FAQ page from the NC Division of Water Resources here.