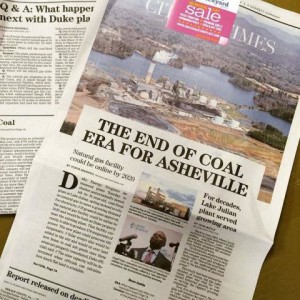 MountainTrue is a proud founding member of the  Asheville Beyond Coal  coalition. Powered by a community of dedicated advocates and volunteers, we were instrumental in securing a commitment to retire the Asheville coal plant in May 2015. Check the coalition webpage for the latest news and opportunities to get involved!

Retiring the coal plant will bring many of the changes we’ve fought so long and hard for:

Closing the coal plant will reduce the very real cost our community has been paying: Nationally, coal pollution is responsible for triggering 13,000 asthma attacks and more than $100 billion in health costs each year.

While Duke Energy heard our call to retire coal, it failed us in the decision to build a new 650 megawatt natural gas plant; almost double the output of the coal plant. We will continue pushing to bring truly sustainable energy sources to WNC and call on the City of Asheville to make good on their promise to work with Duke and community partners to develop a plan for clean energy in Asheville.

Stay tuned to our coalition page, Facebook and Twitter on the latest you can do to help bring real commitments for solar and energy efficiency to our community!

Hollywood celebrities and respected journalists span the globe to explore the issues of climate change and cover intimate stories of human triumph and tragedy.

You can also watch the series’ first episode, in full, below.

We value citizen and community engagement in principled advocacy and believe both sound public policy and responsible individual actions are needed to protect our natural environment.

We value integrity, expertise, flexibility, accountability, and transparency in all activities and operations.