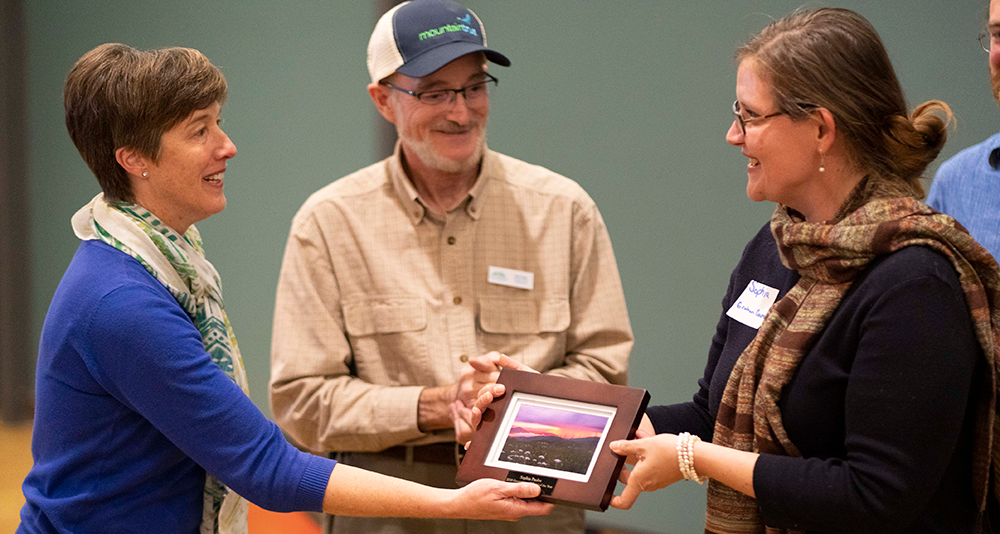 MountainTrue is proud to announce our annual award winners for 2019. These awards are given to MountainTrue members and volunteers who have been outstanding in their commitment to preserving WNC’s natural heritage. Awards will be formally presented at our Annual Gathering on October 23 at New Belgium Brewing Company in Asheville.

The awards are as follows:

Esther Cunningham Award Winner: Katie Breckheimer
This award is given in honor of Esther Cunningham, the founder of the Western North Carolina Alliance, and is MountainTrue’s most prestigious award.

Katie Breckheimer has been a leader in environmental advocacy in WNC for over three decades. She was active with the Environmental and Conservation Organization (ECO) in Henderson County, and then was crucial to the success of the transformative 2015 merger between ECO, the Western North Carolina Alliance (WNCA) and the Jackson-Macon Conservation Alliance (JMCA) that created MountainTrue. Not long after the merger, Katie’s natural capacity for leadership and her commitment to our work led her to serve a term as MountainTrue’s Board Chair.

Katie has played a major role in advocacy efforts including green energy, promoting greenways and recycling, and stopping coal ash pollution and expansion of Asheville’s Duke Energy power plant. Katie launched and continues to host Green Drinks in Hendersonville, a monthly social gathering and lecture series on environmental issues. Her passion for and dedication to environmental protection is beyond compare, and has positioned her as a leading voice for natural resources across the region.

Volunteer of the Year for the High Country Region: Chris Souhrada

Shortly after moving to Banner Elk, Chris connected with MountainTrue and immediately became one of MountainTrue’s most dedicated and reliable volunteers in the High Country. Chris has been a long-running water quality volunteer with the Volunteer Water Information Network (VWIN) program. High Country Regional Director Andy Hill calls him “the MVP and anchor of the water quality team who covers for others when needed, goes above and beyond what is asked of him and is always willing to help with other projects like livestaking and non-native invasive removal.” In general, Andy says Chris is just a hell of a guy and we are pleased to award him our High Country Region Volunteer of the Year!

Volunteers of the Year for the Southern Region: Kay Shurtleff and Lucy Butler

Kay and Lucy have both been committed volunteers with MountainTrue’s Southern Regional Office water quality monitoring programs for over a decade. Together they coordinate over 30 water testing sites by collecting samples from all of the volunteers and transporting them to the lab every month. They also participate in and coordinate biomonitoring for water insects in local streams twice per year. In addition to their ongoing commitments to our water programs, they have helped with a variety of other initiatives including Christmas tree recycling, river cleanups, local festivals, and advocacy at public meetings. Southern Region Director Gray Jernigan says “they are two of our most dedicated and reliable members and set the example by being great stewards of our natural environment.” Congratulations Kay and Lucy!

Volunteer of the Year for the Western Region: Charlie Swor

As the former secretary of the Hiwassee River Watershed Coalition (HRWC) board of directors, Charlie worked hard on the complex and successful merger between HRWC and MountainTrue this past summer. Charlie also participates in our volunteer water quality monitoring program, taking monthly water chemistry and E. coli measurements from Corn Creek. He spearheaded a partnership between Young Harris College and HRWC for management of the Corn Creek riparian corridor, creating a much healthier stream environment and a more pleasant walk on the college’s streamside trail. Charlie float-fishes area rivers on a regular basis and lets us know when he discovers issues that might impact water quality. “Charlie is one of those ‘go-to’ guys when we need help with set-up for an event or really any ‘ole thing,” says Western Regional Director Callie Moore. “If he’s not busy and his wife, Rachel can take care of the kids (thanks Rachel!), he’s there!”

Volunteer of the Year for the Central Region: Erin Gregory

Erin has been a key volunteer for the French Broad Riverkeeper program for the last two years, spending hours each week collecting water samples that have led to the team finding no fewer than three major sewer issues. When French Broad Riverkeeper Hartwell Carson and Watershed Outreach Coordinator Anna Alsobrook were out of town earlier this summer, Erin texted them to report an issue and then also contacted the North Carolina Department of Environmental Quality on their behalf to instigate a quicker response. She has single-handedly created a French Broad River Festival for our Beer Series at The Wedge, including gear builders, outfitters, and other local producers, and she prompted the Asheville Yoga Center to designate MountainTrue their Charity of the Month. We couldn’t do it without you Erin!