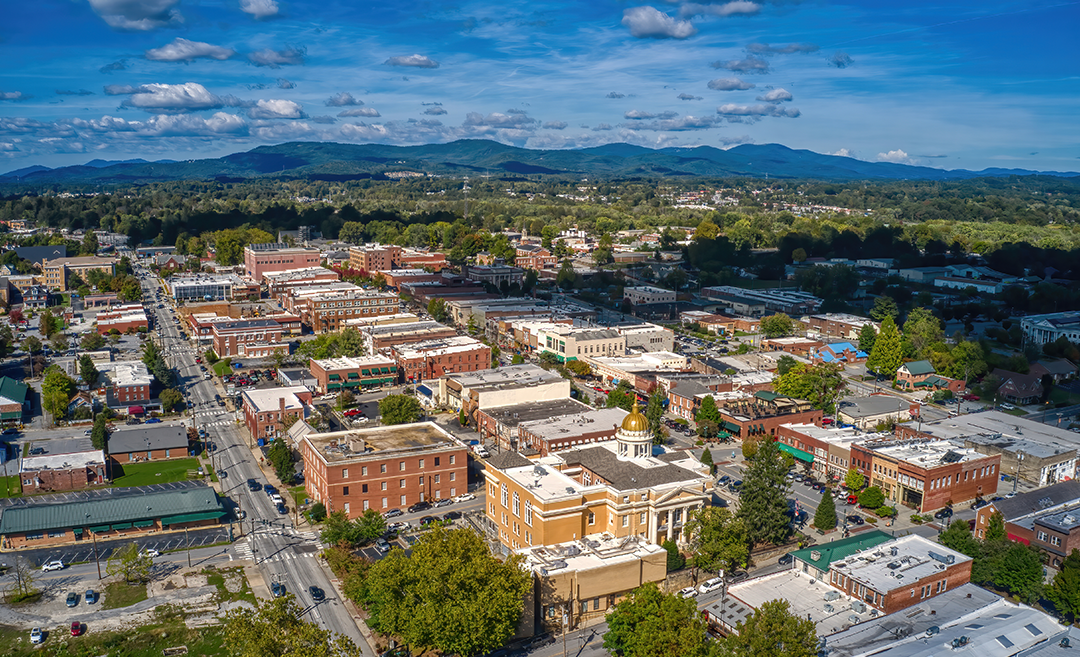 MountainTrue has significant concerns about the latest draft of the 2045 Henderson County Comprehensive Plan. While much of the document and its goals reflect the priorities of our community, many plan recommendations are now undermined by weak or ambiguous language.

MountainTrue staff and volunteers have analyzed the current draft and prepared the following open letter — which has been shared with County Commissioners by MountainTrue’s Southern Regional Director, Nancy Díaz.

What you can do:

On December 1, the Planning Board approved, with no opportunity for public input, a catalog of edits undermining and further weakening the County’s ability to meet its own goals. In addition, the current Suitability Maps are in conflict with the expressed goals of the plan. MountainTrue urges Henderson County Commissioners to revise the December draft — which doesn’t fully address the priorities of County residents as reflected in the County’s own public survey — by reverting to the earlier language of the 2045 Comprehensive Plan.

While the County deserves praise for passing a resolution to start conversations with the City of Hendersonville toward establishing a joint water and sewer commission, the Comprehensive Planning process itself has been less than ideal. Overall, the goals of the current plan are good, and the November draft of the Comprehensive Plan laid out sensible recommendations. However, the latest edits proposed by the Planning Board will make meeting the plan’s goals more difficult.

Weakening the Hand of the County
One of the most exciting ideas to come from the current planning process is the establishment of a preservation program to establish agricultural conservation easements. On page 62, under Goal 2 (Protect and Conserve Rural Character and Agriculture), the Planning Board revised a recommendation (Rec. 2.2.B) from “creating” to merely “consider the creation” of such a fund. The “consideration” of a farmland preservation fund was proposed in the last Comprehensive Plan. It’s time for the County to adopt more ambitious and committed wording.

On page 67, under Goal 3 (Improve Resiliency of the Natural and Built Environment), the Planning Board ignores safety concerns when it comes to limiting development above and below hazardous steep slopes, demoting a recommendation (Rec 3.3.A) from “encourage the preservation of open space and conservation areas in and around areas with a high potential for landslides” to just “consider encouraging.” The County Commissioners should “encourage” at the very least and would do better by establishing a strong steep slopes construction code.

On page 68, Rec. 3.4.D the Planning Board replaced “remove regulatory barriers […] for green infrastructure projects” with only the consideration of such regulatory barriers, which is too weak. Furthermore, a definition of Green Infrastructure is missing from the glossary. County Commissioners should adopt this definition: Green infrastructure is a network of natural and built green spaces that provide environmental, economic, and social benefits. It includes green spaces such as parks, trees, urban forests, streetscapes, green roofs and green walls, rain gardens, and more. These green spaces help to mitigate the effects of urbanization, protect ecosystems, reduce pollution, and improve public health.

On page 68, the imperative (Rec. 3.3.G) to “adopt” best practice design standards for new construction within the Wildland Urban Interface” was downgraded to an “encouragement.” On page 72, in the second paragraph for the description of Goal 4 (Connectivity),  multimodal transportation funding is unnecessarily limited to the Utility Service Area. The County is promoting Greenways as alternative routes for transportation and to connect communities. This means building greenways not just within one Utility Service Area but also between them — such as Edneyville to Hendersonville. In each of these instances, County Commissioners should restore the more assertive language of the November draft and consider further strengthening the recommendations.

Turning a Blind Eye Toward Real-World Challenges
At their December 1 meeting, the Planning Board excised from the Comprehensive Plan the sole mention of climate change. The region is experiencing more frequent, extreme rain events — what used to be classified as “100-year floods” are now happening every five or ten years. At the other extreme, when droughts do occur, they are expected to be hotter and longer, increasing the risks of a repeat of the destructive wildfires of 2016 — which forced the evacuation of 1,000 people in the areas of Bat Cave, Chimney Rock, and Lake Lure.

Shifting climatic conditions put our farmers and their ability to grow food at risk, degrade our water quality, and negatively impact our tourism and outdoor recreation economy, yet, the Planning Board ignores these risks with the deletion of a sentence acknowledging these basic realities. The County should restore the language of the prior draft, which read, “As the frequency of extreme weather events increases, flooding, landslides, and drought-induced fires are likely to become a more regular occurrence.” Additionally, we suggest adding a sentence to this section clearly stating that “The County will develop policies and procedures that will improve the resiliency of the County to wildfires, flooding, and landslides.” (Coinciding with 29% of the respondents of the survey (p.144)

In some ways, the draft Comprehensive Plan is proactive when it comes to our changing climate realities. However, in critical areas, the changes made by the Planning Board unnecessarily limit the County’s ability to mitigate and adapt. For example, the Planning Board deleted a recommendation 2.2.D (page 62 in the November draft) that read, “Consider the introduction of Smart Solar programs throughout the County to encourage solar energy development and safeguard farmland” and recommendation 4.6.A-C (page 74 in the November draft) that read “Support the use of electric vehicles to reduce air pollution and dependency on fossil fuels.” Advancements to renewable energy, and more specifically solar panel and battery technology, have made green energy cheaper, cleaner, and more reliable than fossil fuels. To save on energy costs, the County should restore the recommendation to introduce Smart Solar programs, and in light of a recent projection (Bloomberg) that at least half of all passenger cars sold in the US will be electric vehicles by 2030, we would urge the Commissioners to restore the full text of these deleted sections.

Fixing Critical Flaws to the Suitability Maps
There are major flaws with the proposed Commercial and Industrial Suitability Maps found in the draft appendix of the Henderson Comprehensive Plan. These maps appear to conflict with the accompanying Plan Maps, as well as the Comp Plan’s stated goals and public input. Despite strong support for the preservation of open space and working farmlands, the designated suitable areas include sensitive natural areas, prime farmland, and key transition zones between protected lands and low-density residential areas. It appears that the map’s designers did not appropriately weigh for the following criteria: Biodiversity and Habitat Value, Agricultural Lands, Prime Farmland Soils, Wildfire Threat, Landslide Threat, or Flooding Threat.

While we understand that the Suitability Maps are not authoritative, they will certainly be cited by developers looking to build commercial or industrial projects within the areas highlighted as suitable. In addition, these maps will serve as guideposts for future Planning Board members and County Commissioners, which could influence land-use policy decisions. Therefore, it is important that these maps are accurate and reflect the goals and values stated within the Comprehensive Plan. The staff and their consultant should redraw the Industrial and Commercial Suitability maps and adjust the weighting to incorporate values expressed in the Comprehensive Plan’s own goals — namely, the preservation of farmlands and the protection of open space.

Furthermore, these flawed maps are granted an unwarranted level of importance by the Planning Board in its December revisions to the first Outcome on page 35. The plan’s outcomes are “established based on stakeholder and citizen feedback” (page 54) and are the bedrock upon which goals, recommendations, and actions were subsequently developed. All three outcomes were included without change in every version of the plan since the September 9, 2022 draft — until the Planning Board rewrote Outcome 1 in December.

The prior Outcome 1 reads, “Make intentional land use decisions that protect agriculture, rural character, and natural resources while strategically guiding development.” This was changed to “Make intentional land use decisions that preserve agriculture, rural character, and natural resources with the Future Land Use Map as a guide” (pages 35 and 56)  This elevated the Future Land Use Map above the important policies articulated in the Comprehensive Plan and is in direct contradiction to the intent expressed in every draft (including the current one) that “the map and associated policies are meant to guide growth and development as well as land use regulations in the County planning jurisdiction …” (page 40, emphasis added). Rather than altering a high-level outcome so late in the planning process, we suggest that the language in prior drafts be restored.

Erasure & Exclusionary Language
In the “History of the County” section on page 12, the Planning Board has removed a reference to the Cherokee and Catawba and to the “forcible relocation” of Native Americans via the Trail of Tears. As a result, the Planning Board has taken an acknowledgment of a shameful chapter in our nation’s history and erased it completely. While intentions may not have been to hide, MountainTrue would not want the County to appear to be obscuring this part of our history. We encourage the County to reach out to the Eastern Band of the Cherokee Indians and other representatives of Native American peoples to adopt language that is accurate and respectful to our shared history.

Further down on page 12, the Planning Board suggests new language stating that “To plan for the future, the County must acknowledge its past and current strengths, in order to plan for the best possible future development of the County for its citizens.” There is no reason to circumscribe the beneficiaries of this plan to County citizens. There are many people who have a vested interest in the future of the County, including part-time residents, visitors, commuting workers, medical patients, and tax-paying lawful permanent residents.  MountainTrue recommends just ending the sentence with the word “County.”

Looking Ahead to Implementation
In summary, while many of these changes may seem minor, we believe that, in this case, the devil really is in the details. The 2045 Comprehensive Plan is meant to serve as a long-range vision for future growth and development for Henderson County. As such, it is the responsibility of the County Commissioners to ensure that the goals reflect the priorities and desires of the people who live and work in Henderson County and the voters who elected them to office.

Through extensive public outreach and the County’s own community survey, those priorities are clear and largely reflected in much of the narrative and goals laid down in the Comprehensive Plan. Unfortunately, the December edits proposed by the Planning Board seem specifically designed to remove any sense of urgency or accountability and make the plan harder to implement.

The Comprehensive Plan still lacks an Implementation Section, which the Planning Board has assured the public can be adopted even after the Plan is voted on and approved by the County Commission. Clearly identifying what is to be done, by whom, and by what time is critical to turning the hopes and aspirations of the County residents into reality in a transparent and effective way. While MountainTrue continues to advocate for the inclusion of a well-thought-through implementation process, the lack of an Implementation Section underscores the importance of getting the details and recommendations right now.