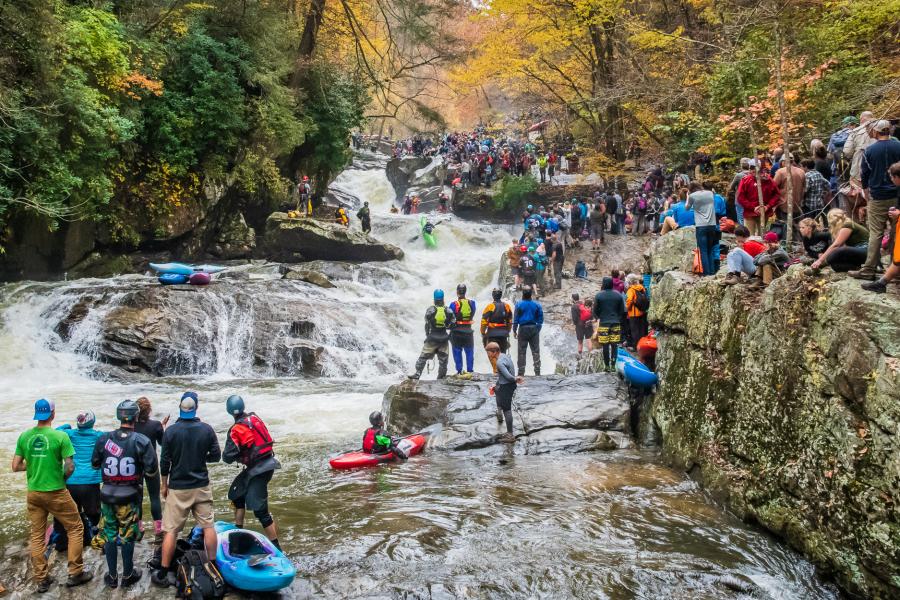 Whitewater Kayakers Receive $8,000 Grant from the Community Foundation of Henderson County to Save Hemlock Trees in Green River Gorge

Hendersonville, NC – The Paddlers Hemlock Health Action Taskforce (PHHAT), a group of whitewater kayakers, nonprofit and government partners working to save hemlock trees in the Green River Gorge, has received an $8,000 grant from the Perry N. Rudnick Endowment Fund of the Community Foundation of Henderson County. PHHAT’s mission is to save hemlock trees from the hemlock woolly adelgid, a non-native invasive insect from East Asia that is decimating hemlock tree populations in the Southeast.

Many of the largest hemlocks along the Green River are found in the Green River Gorge, whose steep terrain make the trees inaccessible by foot. Since 2017, the North Carolina Wildlife Resources Commission, the Hemlock Restoration Initiative, American Whitewater and MountainTrue’s Green Riverkeeper have come together to train local paddlers in hemlock treatment techniques and safety protocols. The paddlers then navigate the Green River’s tricky waters to bury pellets of a hydrophobic pesticide around the roots of hemlock trees. Currently the only reliable remedy, this treatment protects the trees for up to 5 years.

“As land managers, we often rely on the help of volunteers and partners to expand the capacity of work needed to conserve our Game Lands,” said Ryan Jacobs, Wildlife Forest Manager for NC Wildlife Resources Commission. “The work these paddlers are taking on here at Green River would never have happened without their passion for this special place.”

“Our hope is to see our program mirrored in other waterways across the region and even around the nation,” said Kevin Colburn, National Stewardship Director for American Whitewater. “As kayakers, it’s great to be able to give back to some of the places that have given us so much as a community.”

For additional information on the project, please visit paddlersforhemlocks.com.

MountainTrue champions resilient forests, clean waters and healthy communities in Western North Carolina. To this end, MountainTrue fosters and empowers advocates throughout the region to be engaged in policy and project advocacy, outreach and education, and on-the-ground projects.

The Hemlock Restoration Initiative, a program of WNC Communities, works with the NCDA&CS, the USDA-FS and others to ensure that eastern and Carolina hemlocks can withstand the deadly hemlock woolly adelgid and survive to maturity on North Carolina’s public and private lands.

American Whitewater advocates for the preservation and protection of whitewater rivers throughout the United States, and connects the interests of human-powered recreational river users with ecological and science-based data to achieve the goals within its mission.