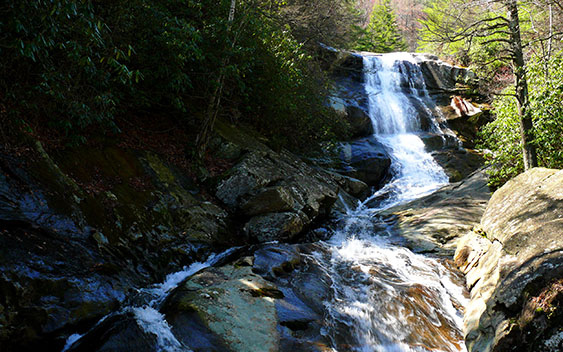 June 29 – A Milestone For Our National Forests

June 29 – A Milestone For Our National Forests

Monday, June 29, 2020 MountainTrue delivered more than 600 public comments on the Draft Management Plan for the Nantahala and Pisgah National Forests that were generated through our online commenting portals and cards that we handed out at trailheads. This moment marked a major milestone in a six-year public campaign to win a better Forest Management Plan.

In that time, MountainTrue members and supporters have generated thousands of comments throughout the different phases of the plan, and MountainTrue staff have spent tens of thousands of hours in the field, reviewing planning drafts and documents, working with stakeholders and drafting formal comments. We organized four panel events across Western North Carolina and six more on-line virtual info sessions since the COVID-19 lockdown.

MountainTrue was also a key collaborator and signer of the 107-page comment letter from the Nantahala-Pisgah Forest Partnership. Through our participation in the Partnership, we’re proud to have helped foster a collaborative spirit among a broad set of forest user groups that we hope will last well into the future. We also helped draft 326 pages of legal and technical comments in partnership with the Southern Environmental Law Center, the Wilderness Society and Defenders of Wildlife to guide the Forest Service in their drafting of a final plan.

Let us take this moment to celebrate each other for our collective hard work. Great job! And let’s hope that it all pays off with a great Management Plan that protects our forest ecosystems, helps sustain our region’s economy and provides our community with wonderful places to work, play and rejuvenate. 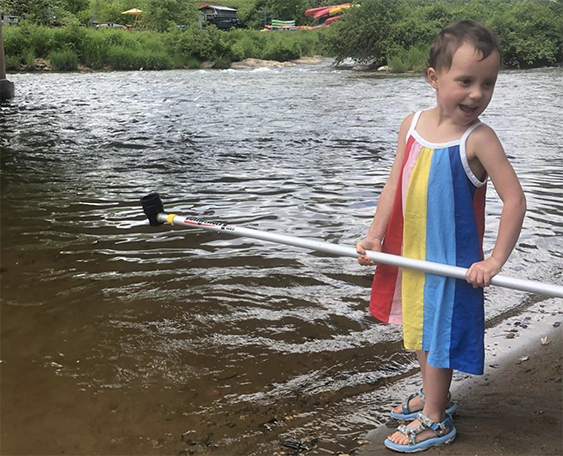 Our bacteria monitoring program in the High Country is in full swing, and this year we’ve expanded to include two additional testing sites on the New River and four more sites on the Watauga River tailwaters. So far we’re seeing mixed bacteria results across the watershed, with three of the sites we monitor consistently failing to meet EPA water quality standards: Calloway Bridge on the Watauga River, Guy Ford Bridge and Hickory Nut Gap Road on the Elk River.

Calloway Bridge is located in Foscoe, where high levels of E. coli are likely a result of failing infrastructures such as septic systems and small non-municipal sewage plants referred to as package plants. The higher bacteria levels at Guy Ford Road are likely due to agricultural runoff in the Beaverdam Creek area. And problems at Hickory Nut Gap on the Elk River are likely due to a mix of stormwater runoff from golf courses and failing sewer infrastructure. The high levels of pollution at Elk River Falls and our new Tennessee tailwater sites are also likely caused by failing sewer infrastructure.

This year’s water quality results have been worse than last year’s, which could be due to changes in how land near our rivers is being used and/or higher than average rainfall. Water pollution is caused not only by leaks in broken sewer pipes, but also when heavy rains overwhelm sewage systems and cause them to overflow – releasing large amounts of untreated sewage directly into rivers, streams and lakes. Unfortunately, these pollution events are common, and we believe many of them go unreported to the public. When they are reported, it can take weeks to find out and the public is expected to learn about them through legal ads in local newspapers. We believe that such overflows are contributing to rising bacteria and nutrient levels resulting in algal blooms in the Elk and Watauga Rivers as well as Watauga Lake.

To better track sources of pollution we’ve hired Hannah Woodburn as our AmeriCorps Water Quality Administrator, added lab capacity to our testing program and have begun using new cutting-edge techniques. One such technique is using a fluorometer to trace the optical brighteners and detergents commonly found in sewage in order to track pollution in real-time.

To help tackle the likely sources of bacterial pollution, MountainTrue has launched the ILoveRivers.org campaign and we need your help in pushing for a package of reforms at the federal, state and local levels to increase investments in fixing our sewage infrastructure, help farmers improve their agricultural practices, and upgrade our public notification system so the public learns about SSOs when they happen not weeks later.

For resources on how to help improve water quality in the High Country take action at ILoveRivers.org. 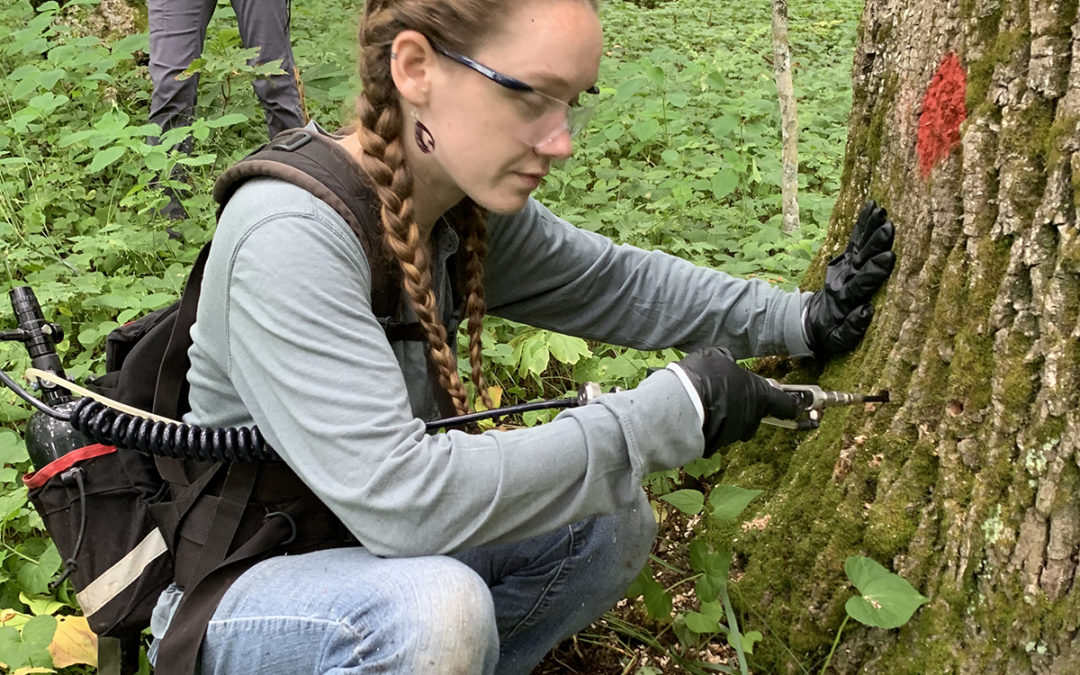 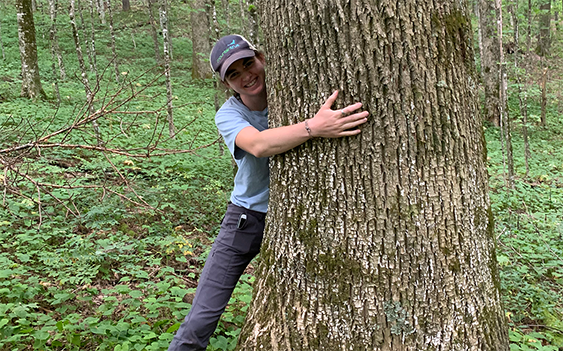 Over the past few years, MountainTrue has taken on the task of identifying and treating priority ash groves around WNC in response to the threat of the Emerald Ash Borer. This non-native invasive insect is wreaking havoc throughout the state, and many of the trees we have treated are surrounded by bare branches from neighboring dead ashes. We have treated over 1,100 trees throughout the region, and committed to re-treating these trees after their initial 3-year treatment wears off.

So far, we have retreated over 100 trees in a beautiful grove on Bluff Mountain in Madison County, along the Appalachian Trail. The trees we have treated have a bright painted dot on the farside of the tree that isn’t visible from the trail. No need to look for the paint, though. These trees are surrounded by diverse wildflowers that shouldn’t be trampled. If you see a living ash tree on Bluff, it’s probably been treated.

We will also be establishing a new site above 4,000 feet in the Big Ivy area of Pisgah National Forest. This area does not yet have any treated groves of ash, and the new site will add to the representation of preserved groves across the landscape.

If you are interested in helping us continue to save these populations, learning about the treatment, or just want to get involved, contact us at josh@mountaintrue.org.

Last week, the North Carolina General Assembly completed most of its work for the 2020 session – and among the flurry of late night meetings and last minute bills that are typical of the end of session, there was some good news for Western North Carolina’s rivers and streams. Legislation approved by both chambers of the General Assembly included two modest but important appropriations: $200,000 to help the Department of Environmental Quality better respond to pollution spills, and $100,000 to MountainTrue to expand our water quality testing efforts focused on E. coli pollution.

Both appropriations occurred because they were on MountainTrue’s legislative agenda, and because we’ve worked closely with our legislators for the past two years to secure them.

The funding for DEQ goes back to a petroleum spill in the Watauga River several years ago that MountainTrue’s Watauga Riverkeeper responded to and worked to resolve for months. At the time, spill response by DEQ was delayed because the source of the pollution could not be determined, and DEQ only provided funding to clean up gas tank spills if their source was known. In the absence of any other funds, DEQ did not have the resources to respond quickly, making a bad situation worse.

MountainTrue met with DEQ senior management on the issue, and then began advocating for a state appropriation to DEQ to clean up spills of undetermined origin. After meetings with WNC legislators Rep. Chuck McGrady, Sen. Chuck Edwards and Sen. Deanna Ballard in 2018 and 2019, the funding was included in the legislature’s final budget. Unfortunately, it was not allocated due to disagreement about the state’s spending plan between the legislature and Governor Cooper.

This year, however, the appropriation was included in separate legislation – again with the crucial support of Rep. McGrady, Sen. Edwards and Sen. Ballard. Governor Cooper is expected to sign this legislation into law.

E. coli bacteria makes its way into our rivers and streams from sewer and septic leaks and stormwater runoff — especially runoff from animal agricultural operations with substandard riparian buffers. E. coli can indicate the presence of other more harmful microbes, such as Cryptosporidium, Giardia, Shigella, and norovirus. Contact with or consumption of contaminated water can cause gastrointestinal illness and skin, ear, respiratory, eye, neurologic and wound infections. The state’s investment will allow MountainTrue to do more sophisticated analysis and help us pinpoint the sources of E. coli and related pathogens.

We won these victories because you, our members, made it possible for MountainTrue to fight for WNC’s communities and environment in the legislature. We are the only WNC environmental organization with a permanent presence at the legislature – and that’s because of you all!

As for the rest of the summer, lawmakers are expected back sometime before July 11 to take up some unfinished business, including veto overrides, before recessing for the rest of the summer. They are scheduled to return in early September to address additional funding for the COVID-19 pandemic. We’ll keep you posted when there are more updates. Until then, we are grateful to be able to celebrate these victories with you!

Do you have a friend who you think would value our Raleigh Report? Spread the word and help them sign up here! 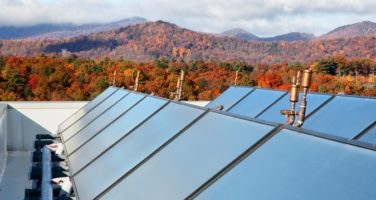 Solar net metering allows solar energy owners to sell excess solar energy produced by their systems back to the grid, making solar much more affordable and accessible than it would be otherwise. But a shady group called the New England Ratepayers Association (NERA) has filed a petition for the Federal Energy Regulatory Commission (FERC) to take over regulation of rooftop solar systems from states – a move that would end net metering as we know it, and cut off an important source of financial savings for solar energy owners in the midst of an economic crisis.​

NERA has a history of suppressing and opposing clean energy options. Their petition would greatly set back renewable energy progress and threaten solar energy savings not only for solar owners, but communities at large in our region. Local solar helps everyone by reducing transmission costs, providing local peak energy resources, and increasing grid resilience.

Take action below to protect solar rights. We encourage you to customize your comment and explain why this issue matters to you personally!